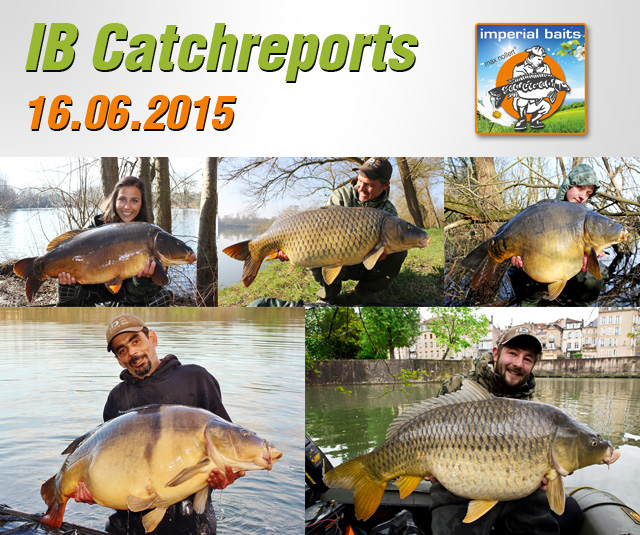 Imperial Baits Ladies Team – Claudia Darga
Claudia Darga caught this beautiful mirror carp on a lake in northern Germany. Temperatures were still in the basement, but the sun was strong on this day, which gaves Claudia the signal to place her rods into shallow shore water. Equipped with some PVA with crushed pink Imperial Baits Uncle Bait boilies, it did not take long time when the carp took the hoobait. Imperial Baits Fan – Jean Paul de Paula
In central France Jean Paul de Paula caught his new Personal Best. He stocked his traps with Imperial Baits Carptrack „Carp Total!“ Boilies 24mm which he also pimped with the highly attractive additives IB Carptrack Amino Complex Powder and Liquid. On top of the 24mm Boilie, which was covered with IB Carptrack Liquid-Powder paste, came a yellow V-Pop 16mm as an „eye-catcher“. 28.5 kilos brought the huge carp to the waymaster and gave him a strong battle! Imperial Baits Team Germany – Julian Jurkewitz
Julian Jurkewitz spent a weekend at the french Moselle. After over 24 hours of continuous rain, the water rose up farther and forced to pull him in a calmer territory. At the heart of the city, he placed a trap on a bridge pier with IB Carptrack Birdfoot Banana boilies, amino pellets and some corn, which he refined in addition with Liquid Amino and the natural sweetner NHDC. Just 30 minutes later, he won against the first fish, while the photo session, the second came on… 17 & 14 kilos river fighter! Imperial Baits Ladies Team – Selina Kürner
Selina Kürner fished a gravelpit in Germany where the fishing is pretty limited. Boats in any form is prohibited and allowed to enter the bank only a few places. Selina used the Spotrod and fed hemp and Imperial Baits Carptrack Elite Strawberry boilies. A little red V-Pop was the hook bait on the bait bed. In very short time she caught a couple of very nice and old carp.

Imperial Baits Team Germany – Stefan Uhrig
Stefan Uhrig spent a few days in northern France and tested various waters around the river Moselle. On a gravel pit near the river he ended with great success. He fished very near the shore in shallow water and used as bait the IB Carptrack Birdfoot Banana boilies. What a nice common carp and of course a big fighter!