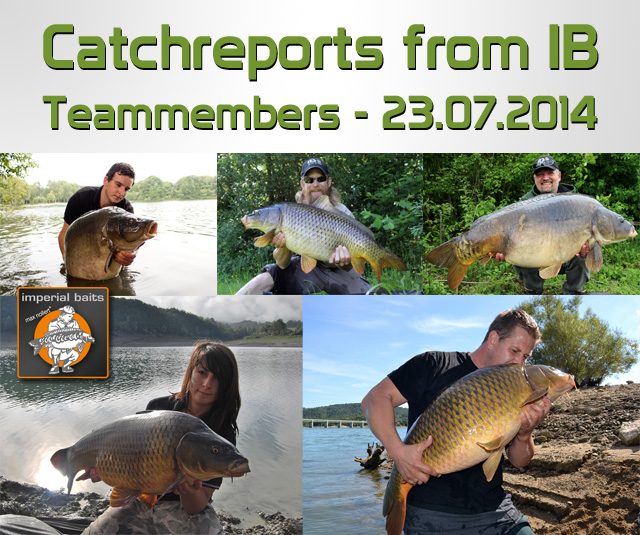 Brad Smudzinski
The American Brad Smudzinski is leading regularly a youth event where he familiarizes the children with fishing. There he shows different fishing techniques and of course also the modern carp fishing must not be missed. This time the event took place at a park lake. Brad placed to rods with the new “Carp Total!” Boilie. It only took a few minutes to the first run. Just a little time later even a double run occurred on the IB Carptrack “Carp Total!” Boilie. Brad and the kids were enthusiastic and are looking forward to the next common session at the water. IB Lady Elena Antoniucci
IB lady Elena Antoniucci chanced her luck at one of the most difficult reservoir lake in Italy. The session ended in a mud bath as the lake lost within a short time several meters of water. The tackle literally bogged down and each step in the mud drained her of strength. But who perseveres until the end will be recompensed! So Elena was able to dupe this militant scale carp. To get out the best of her baits, Elena moistened the Boilies before their employment, with Carptrack Liquid and Powder. She laid out a feeding area of tennis court size in the middle of the lake and placed each of the 3 rods in regular distances at her Hot Spot. IB Team Germany Frank Heller
Frank Heller loves the fishing at the legendary Lac de Saint Cassien. For many years it always draws him to this place but he came back home each time without any success. Meanwhile the all-season night fishing interdiction makes the situation at the carp-Mecca even more difficult. But Frank also succeeds to catch fishes at bright day and in the scorching heat. He uses little but very eye-catching food. Bright Carptrack V-Pops dipped in one of the tasty Carptrack Amino Dips and additionally a bit of Amino Gel, no carp can resist this. In the early morning Frank placed his rig at the foot of a stone edge the depth of 5m. Already a few hours later he caught one of the strongest Cassien scale carp.

IB Team Germany Jan Federmann
Jan Federmann of course exploited the prolonged Pentecost weekend to go fishing. Big and thick herb fields in a quarry pond nearby the river Rhine made the deposit of his montage very difficult. It was not easy to find the small eating holes, but each time Jan had found one, he placed one of his traps and flicked a handful of IB Carptrack “Carp Total!” Boilie in there. Both baits he put down at shallow areas of the lake at 1,5m water depth. In the middle of the night his Carp Sounder wake him up and a fish hung safely at the Carp’R’Us Cranked-Hook Rig. At the end Jan was holding this considerable scale carp in his hands. IB Team Germany Patrick Scupin
Patrick Scupin took time off to search actively for eating carp. At a thick herb field he struck a bonanza. Big air bubbles rose up and wandered along the herb field. This was the chance to catch a fish rapidly!
Patrick hurried up to put a 20mm Ib Carptrack “Carp Total!” Half´n Half on his Carp`R´Us montage. He was very careful and silent when he sent out his rod a few meters and through a handful of Boilies afterwards. Shortly before sunset the much longed for run started. Patrick was able to deliver the fish of the herb field, the tongue of the scale stopped at 18kg. IB Team Germany Stefan Uhrig
A difficult water-body requires a lot of experience, a perfect placement and the best food. Stefan Uhrig used the new IB Carptrack “Carp Total!” Boilie during his last session in Altrheinhausen. He cut his baits in half and pimped them additionally with Carptrack Liquid and Powder. A handful of Carptrack Aminopellets flew on the 4m deep Hot Spot nearby the shore. After a 15 minutes long fight in the warm, rising sun, Stefan held this beautiful and big scale carp in his hands. IB Team Germany Thorsten Illig
Also Thorsten Illig was impatient to make his first experiences with the brand new IB Carptrack „Carp Total!“ Boilie. At a big and difficult quarry pond nearby the river Weser he tried his luck and fed a few handful of the new Boiliesort. Also while sitting Thorsten used the IB Carptrack “Carp Total!” Half´n Half hook baits. Due to their neutral weight they disappear even with very little suction pressure in the carp’s mouth and dupe even the oldest and cleverest fishes. Beside many other big and beautiful carp, the highlight was this extraordinary fish with the bulky weight of 23,5kg of the very quaint part of the water body. IB Team Germany Tobias Seeber
Tobias Seeber held the new IB Carptrack „Carp Total!“ Boilies in his hands for the first time… After first scepticism he fished a new session exclusively with the new Boilie concept, which contains 61 ingredients. What he experienced at the water was nearly incredible!
Within a short spell the fishes fall upon his feeding placement and were quite addicted to his Boilies. He raised a new water-body record and laid down on the mat also his personal best. 26,5kg was the weight of the big and round, extraordinary fish. Now he has the greatest confidence in the new Boilies and Tobias is looking forward to many sessions with “Carp Total!” Boilies from Imperial Baits.