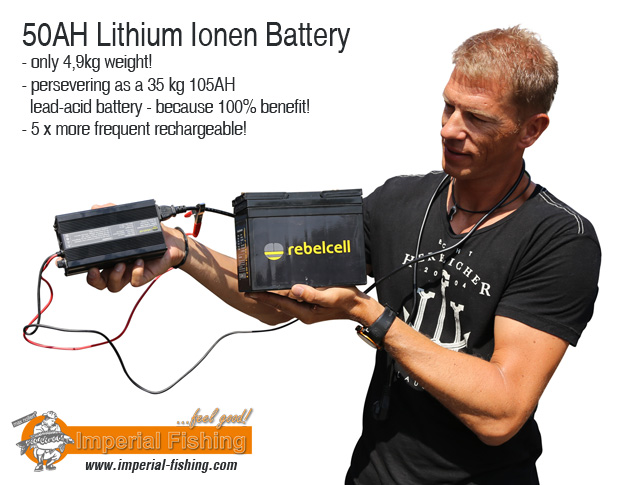 No desire to carry heavy loads?
– Then use Lithium Ion Batteries from Rebelcell!

Advantages over the standard lead battery:
-4,9kg instead of the 35kg and still have as much power as a 105AH AGM lead battery
-5 x longer life than lead batteries (can be recharged up to 5 times more often over its life)
-Does not lose charge even when not used for longer periods of time
-Better Performance! Full power until the end. Lead batteries are known to lose power well before they are empty and then you do not have that needed thrust!
-Li-Ion batteries can be run until they are 100% empty. When that is done to a standard lead battery they perform worse and worse over time. A lead battery should only be run down to 50%, max 70% empty
-Protection features which guard against incorrect poling and extreme heat and cold
-Environmentaly friendly. Lithium = natural salt. They are leak proof and are much more earth friendly than standard lead batteries. 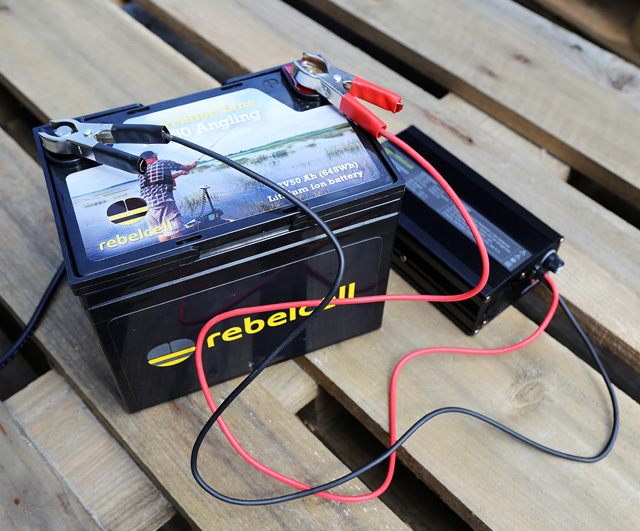 100% more efficient
Peukert-Rule: The effective capacity of a lead battery is dependent to a large degree on the amount of time over which the charge dissapates. A 12V 105AH battery has its best efficiency when it is over a period of 20 hours which it loses its charge. The same battery has only 70Ah of pwer when it loses its charge in a period of an hour. This has to do with the inner workings of the battery. In other words when the e-motor is used at its fullest force much heat is produced. This heat results in a great loss of performance. It can be seen when a fully loaded boat is used to move locations. The power is drained from the battery at a much higher rate than when we simply use it to set up or out to drill carp. This is a demonstration of the Peukert-Rule. The capacity of a Li-Ion battery is not influenced by a longer or shorter period of use. That means that the capacity of 50AH is always 50AH no matter if we use the full charge in one or twenty hours.

Cold weather issues:
It is also true that lead batteries are affected by the outdoor temperatures, especially in winter is the loss of performance great. The placing of a lead battery in a cold garage without a charge over the winter in the death of that battery. This is not the case with Li-Ion batteries!

Run-empty safe:
Lead batteries should not be run down past 50% or a max of 70% empty over longer periods of time. Only then can one expect the full life cycles of 300-400. But in reality, especially with fishing it is often the case that the battery is run until completly empty. This greatly reduces the length of service we can expect from the battery as well as the ability of the battery to continue to store energy. Li-Ion batteries can be run to 100% empty and there is no reduction in performance or length of life. Thus they are the perfect batteries for us! As a reminder- we are comparing a Li-Ion battery at 4,9kg with a lead battery weighing 35kg!!

As applicable to anglers:
When all the factors are evaluated the 12V 50ah Li-Ion battery has about the same capacity = (length of use with e-motor) as a 12V 105Ah AGM battery!
There are a few pioneers from Belgium and Holland who have been using the Rebelcell Li-Ion 50AH battery for some time. They report that the performance is the same as a 105AH lead battery when it comes to length of use with a charge, and capacity. They also report that there is a constant amount of thrust given up to the point when the battery is empty. This is not the case with a lead battery especially when fully loaded or with wind. You need that full thrust ability right up the the end. Not a battery which slowly gives worse and worse thrust until it dies.

You can save!
-50AH Li-Ion Battery including the charging device = 599 euro
-A cheap 105AH lead battery with charging device is not found for under 300 Euro, realistically 100 Euro more!
-Li-Ion batteies can be recharged 5x as many times with an expected life of over 10 years, and that with extreme angler use!
– How many people can say that they have used a lead battery 3 or 4 years and are still satisfied with their performance? When you were to buy another lead battery you would now be at the price of the Li-Ion battery – which weighs 30kg less and has all these advantages.

And last but not least:
In case you are still not interested in the purchase of a Li-Ion battery the reading of this article should have been of some use to you. At least as a reminder that you should probably be handling your lead batteries a bit better and not leave them a little low charged in the basement or run them out on the water to the „last drop“.

Everything happens for a reason!
max nollert