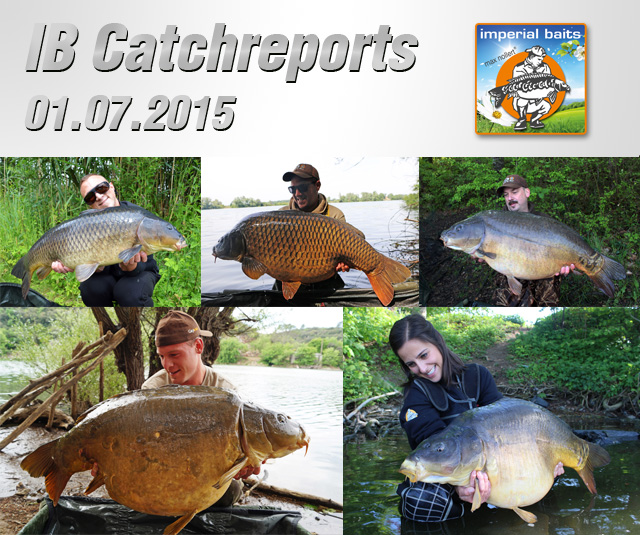 Imperial Baits Team Germany – Werner Mörs
While the first real hot sunny days bring much activity in the flatter areas of the lake Werner Mörs seeks his carp out in the deeper areas. The flat water has much fishing pressure on it and the carp often head deeper. Werner caught many fish on his recent outting with this lump among them! All carp fell to Imperial Baits Carptrack Fish boilies which Werner had covered in Carptrack Liquid Powder Paste.

Imperial Baits Ladies Team – Claudia Darga
Claudia Darga fished for the first time with the new Imperial Baits Carptrack CRAWFISH black & white boilies. In the north part of the country she fished in a natural lake and fed only one handfull of boilies per rod without any additional pimping. In a short period of time she caught fish, among them this old mirror which was the largest of the group. The carp were very receptive to the new CRAWFISH black & white boilies. Imperial Baits Team Germany – Patrick Scupin
It was also the first time that IB teammember Patrick Scupin had the new Imperial Baits Carptrack CRAWFISH black & white Boilies in his kit. He fished for a few hours during the day and quickly caught a pretty, and fiesty common carp along with a bream and a sturgeon as well. Imperial Baits Team Germany – Stefan Uhrig
Mr Big One rang in the early morning with Stefan Uhrig and showed 28 kilo on the clock! The carp was in love with a 24mm Carptrack „Carp Total! boilie topped with a 16mm V-pop. The rig was presented with a small amount of free baits directly in front of a seerose field which was at the edge of a steep drop from 3 to 8 meters. His hook rig was a blowback set on a Carp’R’Us ATS Gladiator Longshank in the size 2. Imperial Baits Team Germany – Thomas Keutmann
Thomas Keutmann is back from a trip to southern France and has a fat lady in his bag. This 22 kilo mirror was still full of eggs. He caught her in the middle of the day in a flat area of the lake on a Imperial Baits Carptrack Half’n Half Banana boilies. As the spawn time can be a difficult time to catch he tried to use visual attraction to produce a bite. The bright yellow Imperial Baits V-Pop did the trick!