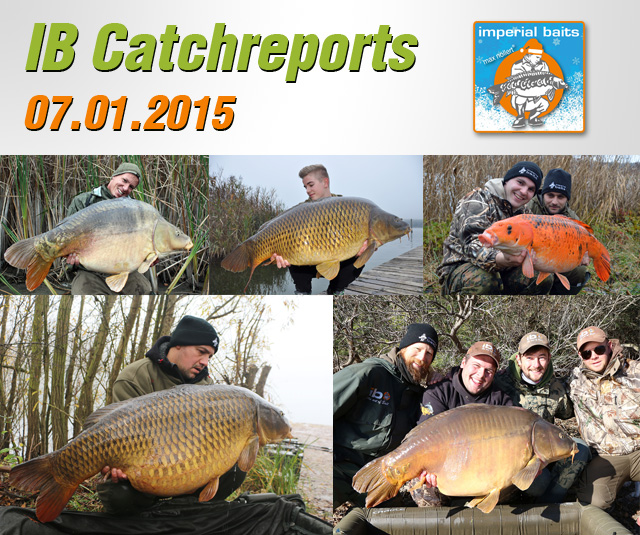 Björn Dostal
Björn Dostal rolled his boilies by himself, but he tested on his last trip to a northern French lake the Imperial Baits Carptrack Liquid-Powder paste. He covered the paste around his hook bait. Very quickly a BIG ONE with 28 kilo sucked in his bait. Björn caught plenty of other fish, and most especially the two largest carp, took the bait hook covered with Liquid-Powder paste.

Imperial Baits Team France – Damien Simonelli
A part of the German IB team was over Christmas and New Year’s Eve at the legendary Lac de Saint Cassien. Damien Simonelli also passed for two nights for fishing and caught right on the first evening this big, fat mirror carp with exactly 25 pounds. Damien has a unique year with 11 different carp over 25 kilos behind him. Most of these BIG ONES, as well as this, he caught with IB Carptrack Fish Boilies and the Liquid-Powder paste. The team spent a wonderful time and some big fish were to follow … Imperial Baits Team Austria – Daniel Trinkl
Daniel Trinkl preferred fishing the large natural lakes in his native Austria. He loves the angling in the winter, because he has the most water by himself and absolute quiet spot. In recent years he has learned how to catch the winter carp. As bait he trusts in Imperial Baits Monster’s Paradise Boilies in the Coldwater version. In good weather, as on this day, he places the rod in very shallow water next to lilies or weed fields. This tactic brought him many fish also these carp with 19 kg into his landing net. Sylvain Halus
Sylvain Halus wanted to fish just after Christmas the French Moselle but the conditions were very bad. He and his friend had to resort to a large quarry. In icy conditions, snow and miserable weather, the boys stay and fight and were rewarded with a fish they would have never dreamed of. Imperial Baits Carptrack Liquid Powder paste and Worm Up Boilies were the key to their success. Imperial Baits Team Germany – Stefan Uhrig
Stefan Uhrig fed at a large German gravel pit, near the Rhine, a spot in the deep water body of 8m. Imperial Baits Carptrack „Carp Total!“ Boilies were the first choice for his project. He covered his hook bait with the IB Carptrack Liquid-Powder paste and it did not take long time before he was rewarded with this 25kg carp.