HomeiBOATS – the power of experience! 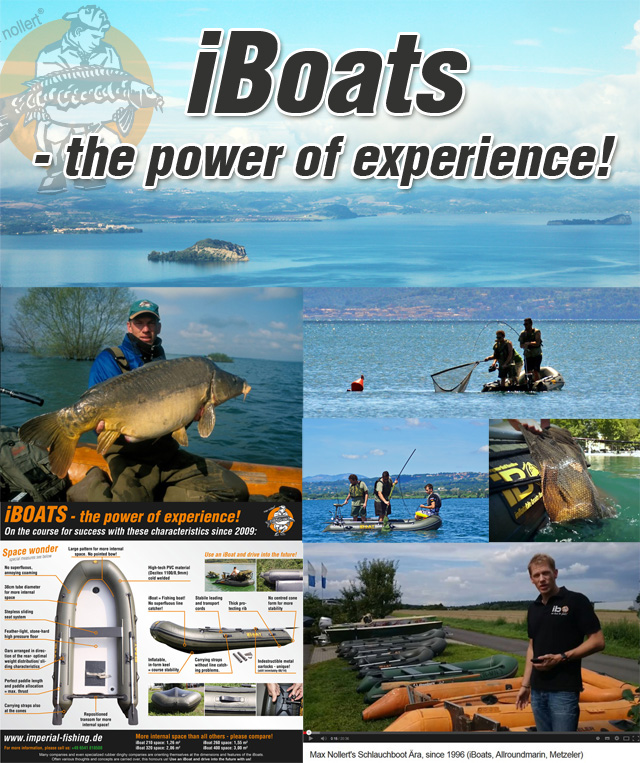 iBOATS – the power of experience!

Max Nollert has been fishing carp since 1988 and has been using sturdy inflatable boats with inflatable floor since 1996. Read the following lines to know more about the experiences that he collected therewith and that finally culminated in developing the Europe-wide known iBoats in 2008/2009. 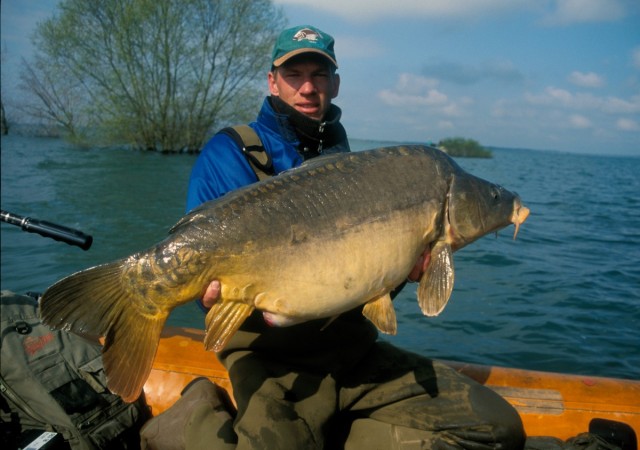 Max Nollert reports:
“First it was the Metzler Bronco S I was keen on. I could buy it during my studying time in 1996 to a very low price from a yacht owner who was always anchoring near us on the river Rhine. He wanted to get himself something new – I rode with it further seven years and I still keep it in my little “corner of memories”. Big advantage of the boat was, without any doubt, the inflatable floor and the sturdy Hyperlon material. Back then the High-tech PVC did not exist in the today form and resilience. The disadvantage: no keel and so each cornering corresponded to a little extra journey. Later with GPS that I introduced to the European market in 2003, the era of „Metzler without keel“ was over. Course stability and in case of need, being able to drive thin corners at a final approach, were and still are very important. „ 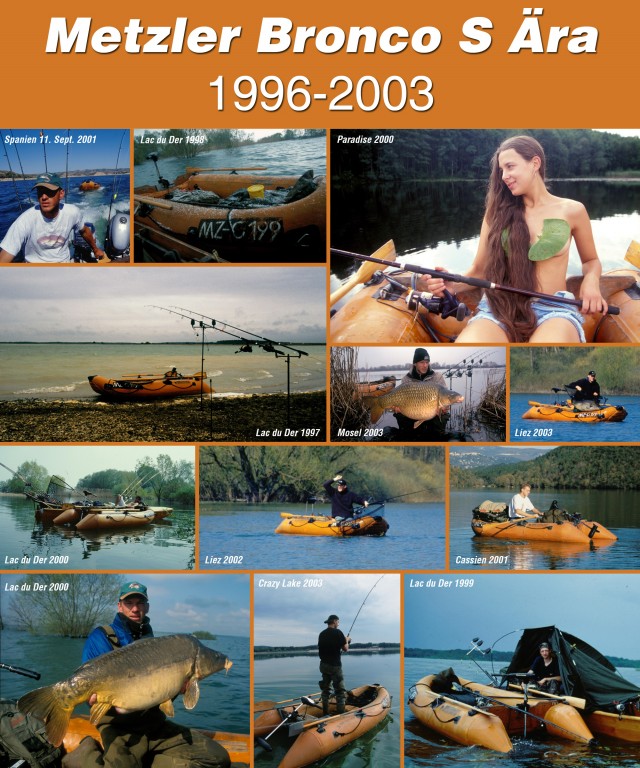 2003 – Keel ahoy
Allroundmarin had what we needed- an inflatable high pressure floor including keel. The Joker 320 was from there on my constant companion, for seven years again.
The seven year itch seams not merely to exist in the marriage… 😉 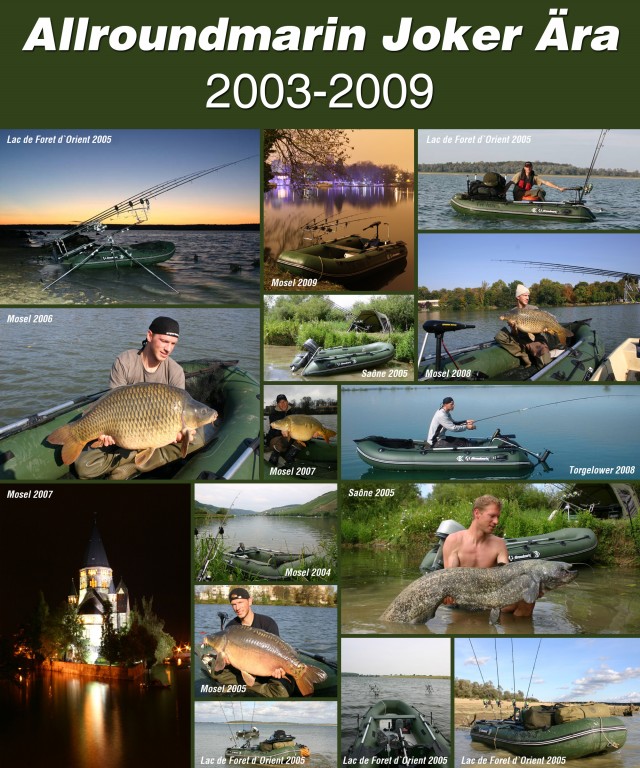 And it gets even better!
The Allroundmarin was good. Good but not good enough! Till 2009 nobody attempted to strike a blow for developing a rubber dinghy especially for carp fisher, what features it would need and which ones we could or even should drop! After the first drawing with grease pencil on the own hall floor to feel the conceived dimensions, I started the search for a convenient company that was able to put my ideas into operation.

And then came the iBoats…! iBoat characteristics and advantages in detail:

No superfluous, annoying coaming made of upright rubber dinghy material!
Who invented that was no carp fisher!

Thinner tube diameter for more internal space!
The smaller tube diameter of 38cm (iBoat 260, 320) is responsible for more interior width. More than all other former “Allroundboats” with 42-45cm diameter. As fishermen we need an optimum of buoyancy and loading volume! The iBoats are also in this domain those who have shown how to do it. Style and slogan have been copied by plenty of companies.

Stepless sliding seat system!
Easy adjusting of solid seats due to sturdy aluminium-leading rail (no plastic). By this way each one, being tall or small, finds his optimal seating position- to paddle in the middle, to drill in the rear and an extra place offer when the carp joins the boat. Also here the iBoats have shown how to do it!

Oars arranged in direction of the rear- optimal weight distribution / sliding characteristics!
The oarlocks are positioned deliberately more at the front in the direction of the transom, so the weight of the driver lies in the middle of the boat and not to close to the bow, as it is the case in most of the boats. At each paddle stroke the boat would plunge in the front, which reduces the vehicle speed. Especially at swell and the presence of a second person on board the centre sitting position is a huge advantage.

Perfect paddle length and paddle allocation = max. thrust
iBoats have after many tests the perfect paddle length concerning leverage, force transmission, driving speed. Due to the boat-dimensions they additionally offer sufficient distance between the two grasps, when both of them are held on the same height.

Carrying straps also at the cones!
To carry the boat comfortably by two, there are carrying straps on both sides in the interior of the cones. One person is standing at the rear and the other one at the bow. Especially when carrying it on narrow paths this is a great advantage. And here again the iBoats were the first!

Repositioned transom for more internal space!
Also since the beginning of the iBoats the transom is deliberately positioned at the farthest end. By this way you get on the same length more space and comfort. This is simple but very effective! iBoats have the shortest – cone :-)!

High-tech PVC material (Decitex 1100 / 0,9mm) cold welded!
All iBoats are made of the same, strong rubber dinghy material. This 0,9mm thick three-coat woven PVC is cold welded in handicraft, which is the highest quality category in the bonding.

iBoat = Fishing boat! No superfluous line catcher!
The iBoats have nether on the sides, nor sideways on the bow in the height of the waterline or underneath superfluous rings, D-rings or loops. Only at the front of the bow and far above the waterline there is a D-ring including a long attachment cord. These characteristics were consciously used first at the iBoats.

Stabile leading and transport cords!
The solid nylon cords are designated for the securing of the boat-loading with rubber expander or to fix the boat at the shore or the fender.

Thick protecting rib!
Bounteously allocated protection ribs at the places were it the rubber hits the road guarantee a long lasting boat life.

No centred cone form for more stability!
The iBoat cones do not end with a conical, pointing forefront. This would make the boat instable in the rear part. The buoyancy part of the iBoat-cones continues to the back even lying on the water-surface, so the iBoat can not plunge or tilt. Additionally the iBoat cones favour the driving with e-motors and gasoline engines.

Inflatable, in-form keel= course stability!
The keel ensures a secure and course holding driving conduct. Notoriously boats without a keel do negotiate corners very bad or not at all, they continue sliding forward even with a given-in e-motor. Only when driving very slowly and even stronger given-in e-motor you can manage the corner.

Carrying straps without line catching problems!
Small carrying straps that do not constitute an additional weight or space or unnecessary line catcher, are placed at the perfect positions, so an iBoat can be balanced and carried by two people comfortably. iBoats did it first!

Indestructible metal oarlocks- unique!
iBoats are the only boats on the market that are standard equipped with metal oarlocks. These are fixed with strong screws and self-retaining nuts. Due to the metal within there is no abrasion and even with strongest charge the metal tube can not break. Common setscrews were substituted by continuous screws. 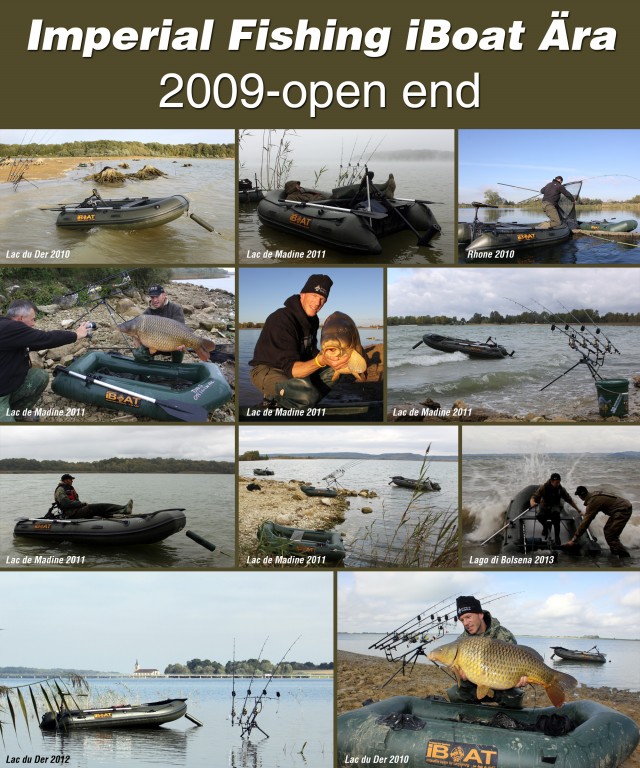 The iBoat deals are interesting for all carp fishers who want to buy more than one boat. It does not matter if you buy them all for yourself or if you ally to a group and the boats are partitioned. This could be a community of purpose that has been founded especially for this iBoat deal via Internet. For whatever reason you want to buy more than one boat- here are the deals…!

iBoat Big Deal
Buy two iBoats never mind what size and receive 10% price reduction on each of the two boats, furthermore the delivery is for free*! 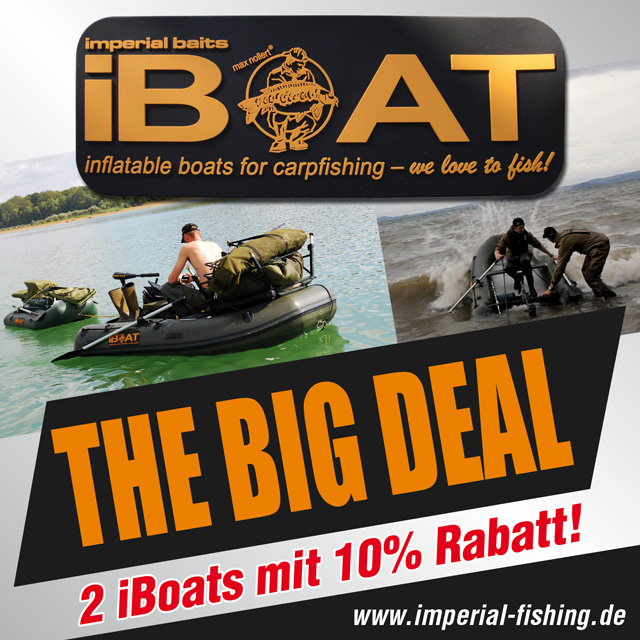 iBoat Mega Deal
Buy three iBoats never mind what size and receive 15% price reduction on each of the three iBoats, furthermore the delivery is for free*! 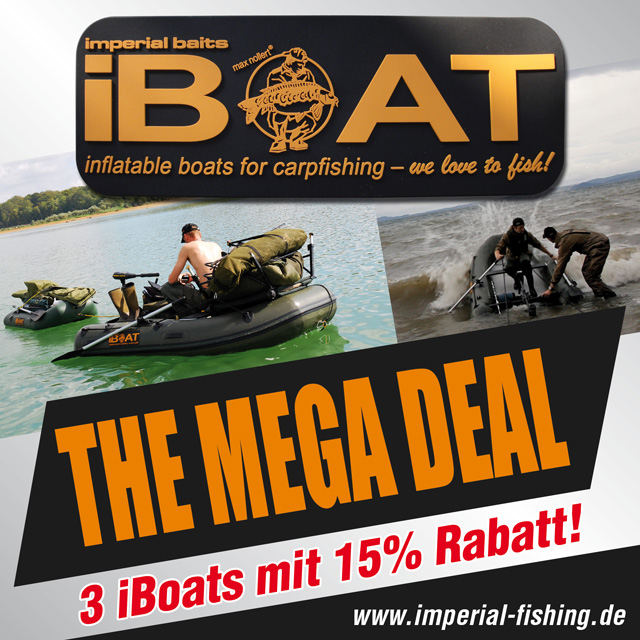 iBoat Ultra Deal
Buy four never mind what size and receive incredible 15% price reduction on each of the four iBoats and get gratis Imperial Baits for 10% of the final price. Furthermore the boats and boilies are delivered for free*! 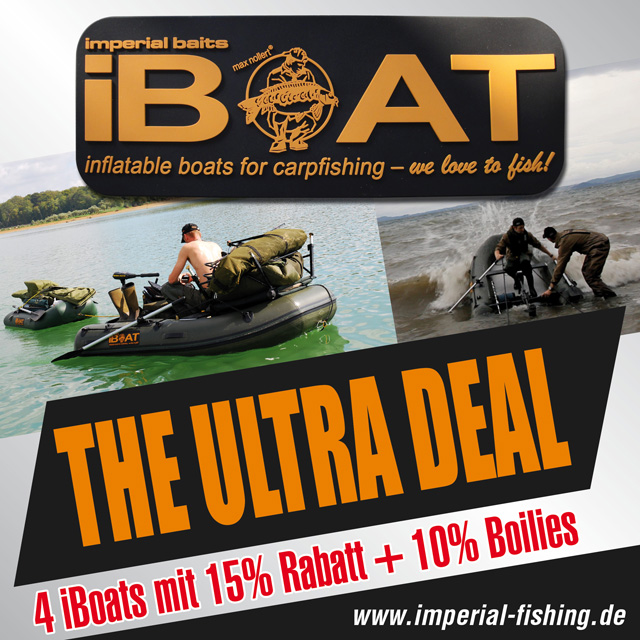 When I met Max Nollert the first time it was an immediate feeling, which has no need of explanation, I saw his great experience in the carpfishing market. From the beginnig when I heard the first time from him I have always admired his innovative ideas. When he showed me his jewel the iBoat 320 I was speechless because it is really a boat built perfectly for carpfishermen! The high quality material which it is made from is a triple layer of Decitex 1100 and the high pressure airfloor is also absolutly solid. It’s suitable for all the situations of extreme fishing at the great lakes with big waves, strong wind, big rocks and everything else. Amazing is the stability of this boat for anglers like me who are 1.95m tall and with a weight of 98 kg heavy (I’m an angler not a model) 🙂

The boat is exactly what I need and I can recommend it to everybody who also like to be face to face with the forces of nature but in a safety iBoat!

Riccardo Battisti and Daniele Colapicchioni in ACTION on the iBoat 320 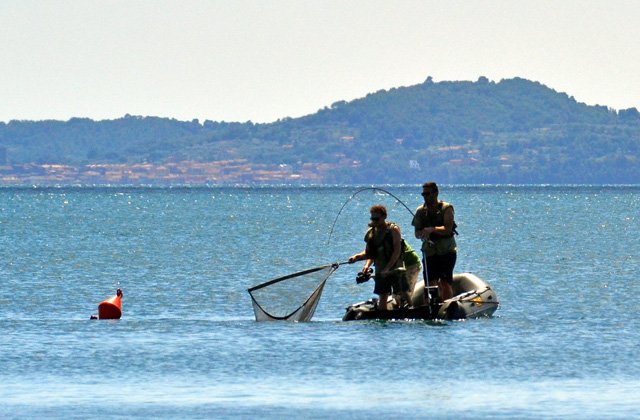 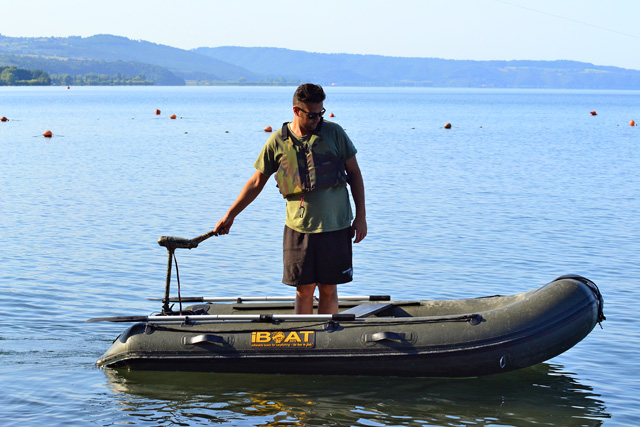 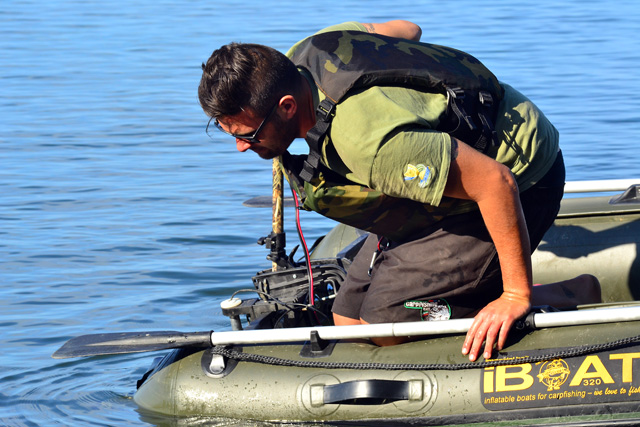 23 kg Bolsena Power in the net!
Take a look on the video at the end of Riccardos Update! 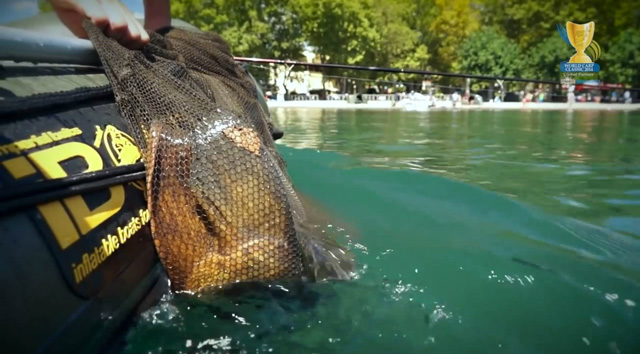 Placing the full HD underwater cams together with Sebastian Heinz from www.carpspot.de! 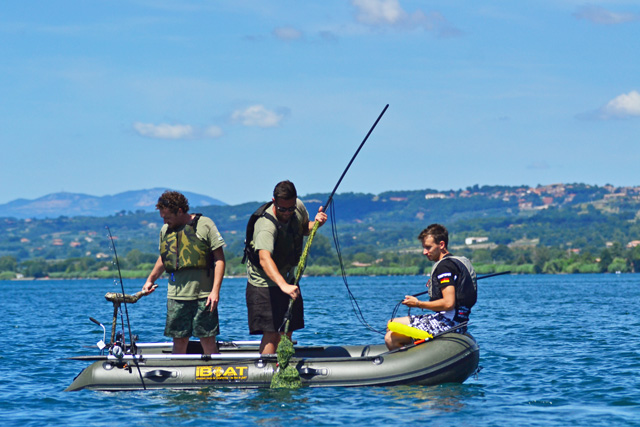 Sebastian also loves the iBoat because of the great space in it! 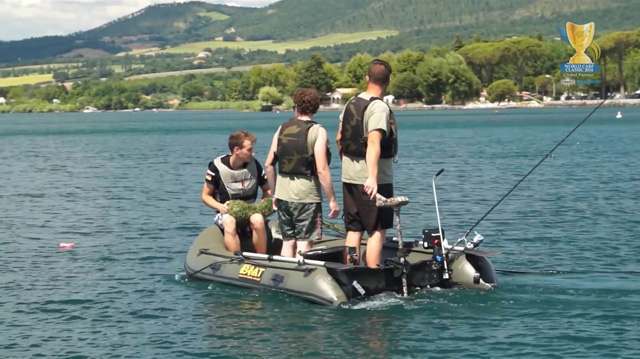 iBoats = Spacewonder!
A lot of space for all the camera equipment! 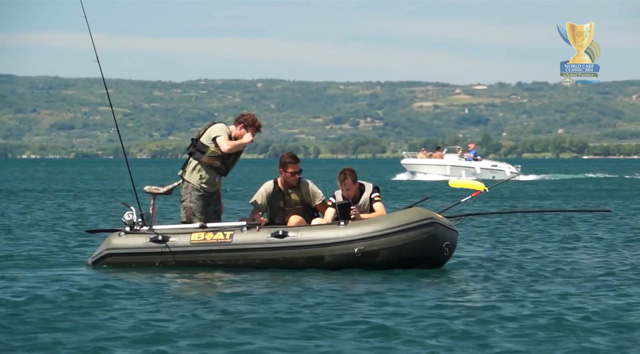 Riccardo Battisti during the testfishing at the Lago di Bolsena.
He shows his fishing style on the big lake:

The first BIG ONE with 23 kg filmed with the full HD underwater cam from www.carpspot.de

Riccardo Battisti and Daniele Colapicchioni from Italy
WE LOVE iBOATS! 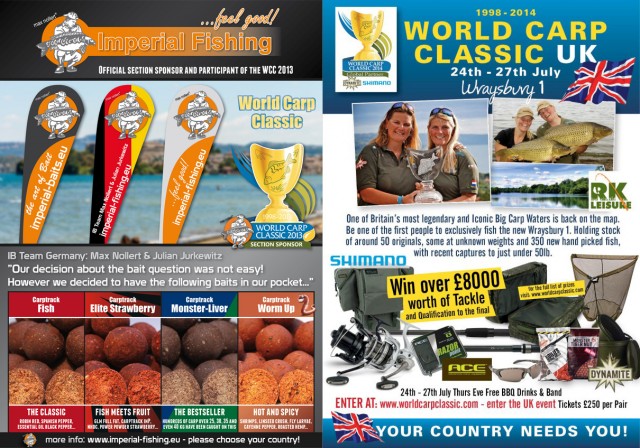